The Resolution: The first three chapters

A Pulled from the Headlines Read

© 2017 All rights reserved. Do not reproduce, copy or use without the author, Michelle Lindo-Rice's written permission. This excerpt is used for promotional purposes only.
Enjoy the First Three Chapters of 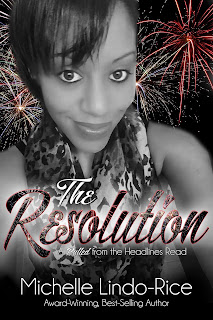 “Congratulations, Dr. Samson,” Isabella said, pulling her in for a hug. “I’m glad I could listen in. You were amazing. ”
Geneva squeezed her friend tight. They rocked back and forth in their embrace. Hearing her professors introduce her as Dr. Samson had made all her late night studies and midnight papers worth it. Her eyes had misted, but she held it together as she shook hands and posed for pictures.
“Thanks for taking the day off to support me, Isabella, and for practicing with me last night. I can’t tell you how much that means to me.”
Ernest had insisted on coming to see his only daughter defend her thesis, but Geneva had stopped him. She didn’t want her father present if she failed. Besides, she had been counting on Josh’s presence. Thank God for friends.
Isabella broke the embrace and tucked her scarf into her coat. “Are you kidding? I had to be here. I’m glad I’m not sitting behind that dreary desk.”
Geneva laughed. “Yeah, right. You know you love going into that courtroom.”
Isabella snapped her fingers. “And you know it. Okay.” The wind blew the hat off her head. Isabella ran to get it. “It’s so cold out here. I wish I had worn my gloves.”
They hurried toward their vehicles. They were parked side by side. Isabella pressed the start button. Her car would be warm and toasty in a couple minutes.
Geneva pulled her wool coat close. “It has to be close to zero degrees. I bet we’re going to have snow.”
“I hope not.” Isabella moaned. “I haven’t gone shopping for boots yet.”
Geneva rolled her eyes. “You have at least ten pair of boots in your closet. It’s a good thing we wear the same shoe size. I’ve saved so much money because of you.”
Isabella gave her a playful slap. Then she shivered. “What I wouldn’t give to be in Jamaica right now.”
“Me too.” Geneva blew into her hands.
“What do you mean, me too?” Isabella put her hands on her hips. “You have a paid trip to Jamaica.”
Geneva raised a brow. “And?”
“Do you need me to spell it out?” Isabella asked. Then she wagged a finger. “I know you. I know you thought about it.”
Geneva touched her chin. “I did, but it’s the honeymoon suite. I’ll look pitiful curled up in there all by myself.”
“So? Call the resort and change rooms.” Isabella pointed to her head. “You’ve got to change your mindset. Consider that vacation your reward for earning your dissertation. You go, girl. You did it.” Isabella broke into a praise jig and then sang, “Dr. Samson in full effect.”
Geneva giggled. “Your age is showing. I don’t know who says that anymore.”
Isabella rolled her neck back and forth. “I do.” She broke into the Prep, a nineties hip hop dance move, and sang, “Geneva in full effect.”
“You taking it way back doing the Prep,” Geneva said, mimicking her.
They did a broke-down version of the Kid-N-Play, another dance move from the nineties, before they cracked up laughing.
“I love you, girl,” Geneva said. “It’s only with you I get this silly.”
“That’s what best friends are for.” Isabella gave her a kiss on the cheek. “I’d better get to the courthouse. My bailiff friend might be worried about me.” She unlocked her door and jumped inside.
“Leave those young men alone, Isabella.”
“Jennifer Lopez and Demi Moore have nothing on me.” With a wave, she pulled off.
Geneva entered her Camry and started the car. She shivered and turned up the heat. While the car warmed up, Geneva rested her head on the steering wheel and prayed.
“Lord, I thank You for seeing me through. I couldn’t have done this without You. Thank You for bringing everything back to my memory. Thank You for helping me rise above.”
She set her music to Kirk Franklin and sang along. Geneva was determined to praise her pain away. The more she sang, the less she thought of he-whose-name-shall-not-be-called.
Geneva pulled into the drive-thru of her favorite, fast food restaurant to get herself a burger and some fries. Her stomach had been in knots and she hadn’t eaten. She couldn’t risk throwing up in the middle of her presentation because of nerves.
She squinted. There was a brown Durango two cars ahead. Her heart slammed into her chest. That was Josh’s SUV.

Posted by Michelle Lindo-Rice at 10:03 PM