A Reason to Sing: The First Three Chapters

© 2017 All rights reserved. Do not reproduce, copy or use without the author, Michelle Lindo-Rice's written permission. This excerpt is used for promotional purposes only.
Enjoy the First Three Chapters of
A Reason to Sing

Book Three of the “Song of the Heart” Series 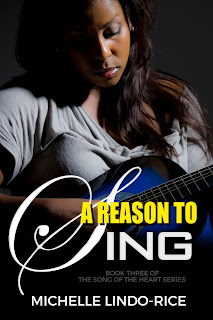 Megan Higgins wished she had never opened that door.
She had ventured up the stairs with a fresh load of laundry when she saw her walk-in closet door ajar. The closet was a small fourth bedroom that her husband, Jackson, had converted into a dressing area as a wedding gift.
Curious, she pushed the door open and gasped. It wasn’t because her clothing had been ripped from the hangers or that her shoes had been tossed to the floor. No, her eyes were riveted on the one-hundred-eighty-pound man swinging two feet off the floor. Megan zoned in on his face, purple from asphyxiation, noting the corded rope twisted around his neck. The white laundry basket filled with baby clothes fell from Megan’s hands onto the lush green carpet. “Jackson!”  She screeched. “What have you done?”
Jackson’s body swayed on the industrial-strength fan he had insisted on installing since the ever-clogged AC duct made the room feel like a sauna in summer. Jackson had had it specially made, bragging it could probably hold two hundred pounds. She never dreamed he would test out his theory. She never dreamed he had been right. “Jackson,” she bellowed again. “You can’t do this.”
Had Jackson been fighting for his life while she was in the basement folding clothes? He had kissed her this morning and said he would be working late.
“Jackson!” Megan pleaded. “You can’t leave me like this! We have a son! Cooper needs you!” She reached into her pocket for her cell phone. She’d left it in the basement. Stifling her hysteria, she tore down the hallway into her bedroom and grabbed the cordless phone from her nightstand before running back into the room.  She punched in 9-1-1, almost tripping over the broken blades from the fan.
While she waited for someone to answer, Megan grabbed Jackson’s legs and pulled them up to rest on her shoulders. “Jackson!” she called again.
“9-1-1, what’s your emergency?” she heard through the line.
Megan wobbled from the strain of her husband’s weight. “Come quick. Help me! I need an ambulance! My husband’s…my husband’s h-h-hanging in my c-c-closet!” She rattled off her address and cut the call, ignoring the operator urging her to stay on the line. Megan dropped the phone as her knees began to buckle. With a sob, she let go of his legs and dragged her dressing table chair under Jackson’s feet.
“Hold on, Jackson,” she pleaded. “The ambulance is on its way.”
Megan wiped her brow. She needed to cut him down. She raced down to the kitchen, snatched a large butcher knife from the wooden block and dashed up the stairs. Megan slid on one of Cooper’s onesies and stumbled to the floor, landing hard on her butt. A couple of inches to the right and she would have been pierced by the knife.
Megan drew a breath, thanking God for quick reflexes. She hoisted to her feet, scrambled into the closet, and stepped on the chair.
It felt like hours instead of mere seconds until Megan successfully sliced the cord. Thank you, Lord. She braced herself, knowing she wouldn’t be able to hold Jackson’s weight. He toppled onto her and her right ankle gave way. Megan fell off the chair and Jackson landed on top of her with a heavy thud.
Holding back a scream, Megan rolled him off her. She squatted next to him and pummeled his chest. “Jackson! Jackson!”
The doorbell pealed followed by loud bangs on the door.
Megan brushed her hair out of her face and scampered downstairs to open the door.
“Mrs. Higgins?”
“He’s upstairs!” she howled to the two EMT workers and returned to the closet, kneeling beside Jackson and squeezing his hand.
When the EMT’s entered, they immediately began CPR.
“I found him hanging,” Megan said as her shoulders slumped and her breathing escalated. She clutched her chest. “I don’t feel good.”
An EMT took Megan’s arm. “Breathe. Breathe. You’re having a panic attack, Mrs. Higgins.”
Megan allowed him to lead her to her chair. She looked over at Jackson and lowered her head. Her life as she knew it was about to change.
It would never be the same.
And she had no one but herself to blame.

Posted by Michelle Lindo-Rice at 7:19 PM